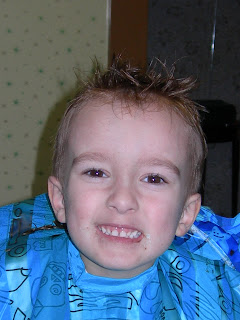 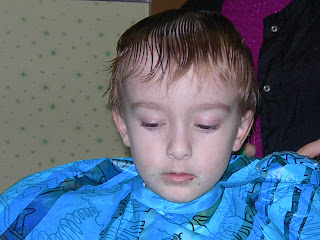 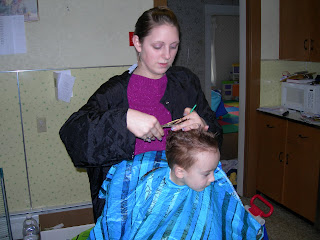 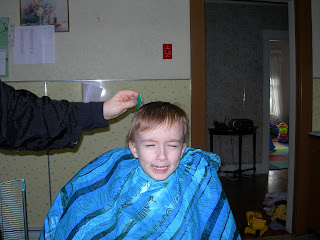 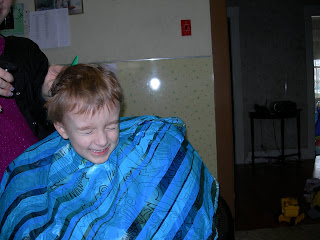 Sam got a much needed hair cut today. It was so wonderful because the hair dresser was willing to come to our house so I didn't have to drag him out, and she came on our timing. Fabulous, thanks Felicia...
In other news I had a very lengthy conversation with Sam's hematologist yesterday. Essentially what she said was that the blood tests they did last monday after his GI bleed, were worse than previous tests. The problem lies within the platelets, and it is related to the platelet agreggation, which essentially is the part of the clotting factor in which the platelets clump together to form a clot. But essentially his platelets don't fit well together and that is why he has been bleeding. Dr Grace believes that there is also a GI problem that is exacerbating the bleeding problem. She seems to think that the bleeding problem will improve was they fix the GI problem. There is no long term treatment, there is no prevention for this. The only treatment is for when he has a bleeding crisis. At that point they would give him a transfusion of platelets and that should resolve the immediate bleed.
Here is a link to learn more about platelet agreggation if you would like to learn more about this. http://medical-dictionary.thefreedictionary.com/platelet+aggregation+test
This is some info quoted from the above page..."There are many factors involved in blood clotting (coagulation). One of the first steps in the process involves small cells in the bloodstream called platelets, which are produced in the bone marrow. Platelets gather at the site of an injury and clump together to form a plug, or aggregate, that helps to limit the loss of blood and promote healing.
Inherited bleeding disorders (e.g., hemophilia or von Willebrand's disease) and acquired bleeding problems that occur because of another disorder or a medication can affect the number of platelets and their level of function. When these problems are present, the result is a drop in platelet aggregation and a lengthened bleeding time.
Prolonged platelet aggregation time can be found in such congenital disorders as hemophilia and von Willebrand's disease, as well as in some connective tissue disorders. Prolonged aggregation times can also occur in leukemia or myeloma; after recent heart/lung bypass or kidney dialysis; and after taking certain drugs."
I am not sure where we go from here. I am not sure what this means for Sam, for the immediate future, or long term. It was so overwhelming yesterday to get this news, and although it is a relief to finally have an answer, it is still scary to have this as a diagnosis. I am looking forward to getting all of the written information, and to see if there is an actual name to whatever this bleeding disorder is. And what all of her recommendations will be.
Posted by Mommato4miracles at 6:56 PM