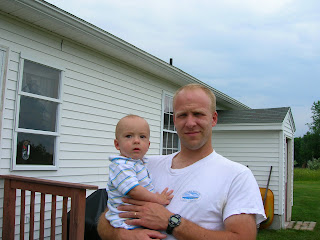 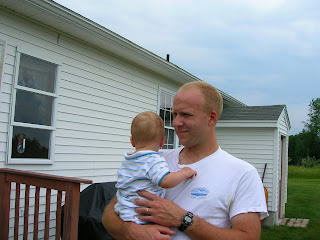 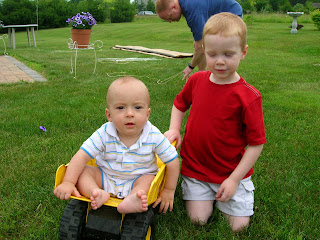 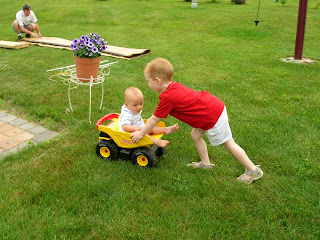 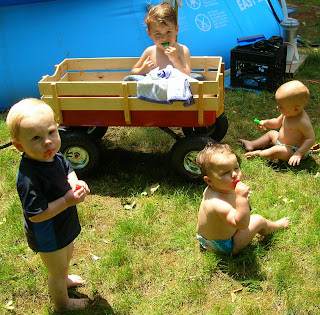 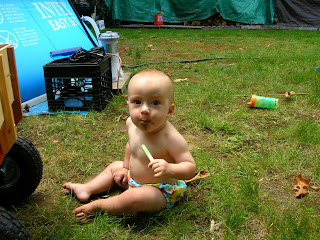 FINALLY!!! Well we finally are getting somewhere with this whole Children's thing. They called the other day and scheduled us with the GI specialist for next monday. And the immunolgy appointment was origionally scheduled for Sept. 11th. Well they called today and now we have an appointment on July 10th! A week and a half!! On a more sour note, Sam seems like he is getting sicker, I called his doctor yesterday to get him tested for the intestinal infection again. I missed her call back yesterday, but talked to her tonight, so we will go tomorrow for another test. Please pray that it is negative and he doesn't hav e it again. He could just be irritable right? That is what I keep telling myself and am praying for.

We had a pretty good day today. We had Sammies friends over and we all went in the pool. And then they all ate popsicles. So cute:) THere are also some pictures from Father;s Day with his Dad, and playing with our nephew Jacob
Posted by Mommato4miracles at 6:45 PM No comments:

Well we got a call from Children's Hospital yesterday. The message on my machine said "This is Amy from urgent appointments, we want to see your son as soon as possible, please call at your earliest convenience" So of course I was working yesterday and missed the call. I got home and called immediately, well they had gone home for the day. So I left a message, leaving my cell phone number and house number and asked to call ASAP today. So I waited all morning and then finally at 11am got anxious and called to see what was going on. So when I called I spoke with same girl, who told me that they wanted to see Sam as soon as possible. WEll then guess what she said?!?!?!? "Oh I am sorry I gave all the emergent appointments away, I will try to get back to you tomorrow or the next day if I can find another one!! I am so frustrated.
Sam is doing well, although today he was so irritable and the diarrhea is back, maybe if I ignore that he might have the intestinal infection it will go away?
Posted by Mommato4miracles at 7:09 PM No comments: 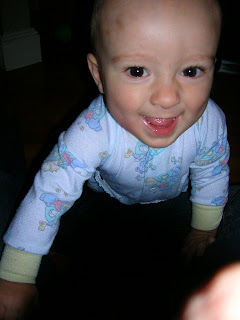 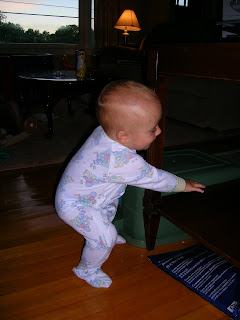 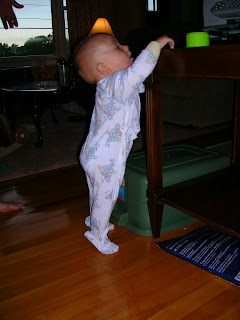 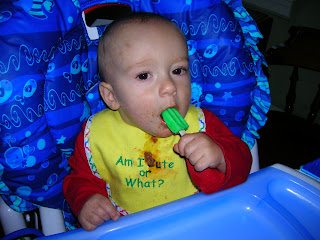 What a miserable weekend we have had. My little guy started with a high fever on friday which we then had to start antibiotics for. Then on saturday it got as high as 103.8, and he already had tylenol and motrin in him. So we of course had to do multiple baths this weekend to cool him down. We saw the Dr on friday and she said his right ear was infected. We saw her today and now both of them are infected. We also got a call from Children's Hospital today. They said that the immunoligy work-up came back slightly abnormal, so we now need to go see a an immunologist. On a positive note, this little guy is more and more active, and has been totally spoiled by having a fever, he has had popsicle after popsicle. And the saga of our life continues...
Posted by Mommato4miracles at 1:21 PM 1 comment:

I feel like this poor kid can never get a break. So we had another doctor's appointment yesterday with his primary, and she said that his ear is full of fluid, not infected yet but full of fluid. She said to call back if the fever (which he has had off and on since saturday) got worse. So of course today when he woke up, after a miserable night, like 6-8 times he woke up, he had a higher temp 102.3 and was absolutely miserable. He fell back asleep and then slept restlessly until 12:30pm. I called the doctor and of course she is off for today, but I spoke with a nurse, and am going to try to make it through the weekend, since we can't give him antibiotics anyways. Ugghhhh!!!!
Posted by Mommato4miracles at 10:49 AM 1 comment: 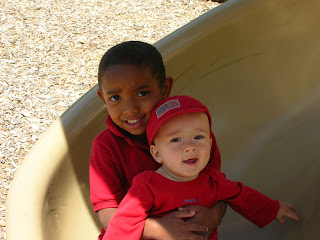 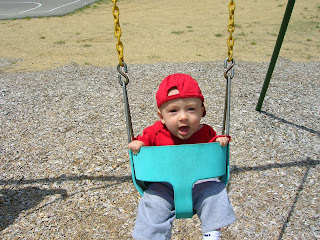 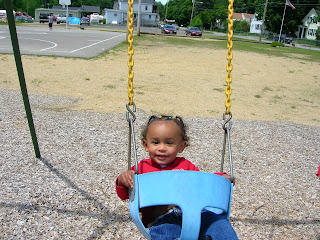 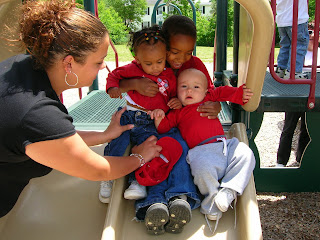 Well we finally had our much awaited appointment at Children's Hospital in Boston. It definitely did not go as we had hoped. First they were late taking us (totally acceptable, I know how things can be), so after waiting about an hour and a half we were finally taken into the exam room. The medical student came in and went through the whole scenario of the last illness with us and how things have been lately. She then said, that she was going to go talk to the doctor and that they would be back to talk to us. Well approximately 45minutes later she returned to say that she was so sorry but the doctor had gone home!!! I was furious. I was completely dumb founded, how do you just leave the office without making sure you have seen all of your patients? It would have been one thing if it was an emergency but they told us it wasn't.
So needless to say we were then introduced to another doctor who basically said that since he didn't know the history and hadn't had a chance to read Sam's chart, he didn't feel comfortable doing anything different. I of course had my long list of questions, wondering about permanent damage, any other things we can do to prevent this, future antibiotic use, etc etc... So he went through some of them with me, but was not really all the interstested in discussing prognosis with me. He did say something that has made me quite anxious though. He said if it were him that were seeing us he would want us to go to an immunologist to make sure that there isn't somethingwrong with Sam's immune system. So that is a little scary.
So I asked what I could do to help him.... he said "keep breastfeeding!!!" I was getting so excited to be done. And now I really shouldn't for the benefit of my son. He said we are doing everything right, and that Sammy is just really good at being sick.
These pictures are from the other day when we played with Davion and Dasanee at the playground.
Posted by Mommato4miracles at 6:40 PM No comments: 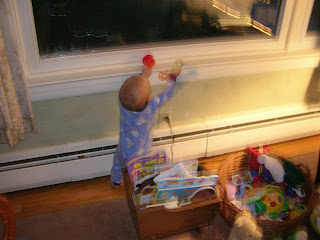 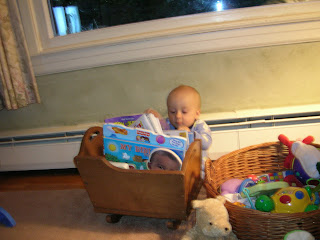 My Sammy just doesn't want to eat. He hasn't eaten well since friday!!! He seems like his stomach is bothering him yet again, and the doctors say there isn't anything else that they can do for him. It is endlessly frustrating to know that your child is in pain, and that there is nothing that you can do to help. Watching him grab at his stomach, or just scream out after eating is horrible. One of these days he is going to correlate the pain with eating, and not eat at all. Please pray that we can get to the bottom of this.
Posted by Mommato4miracles at 4:58 AM No comments:

Playdate with Evan and Alyssa 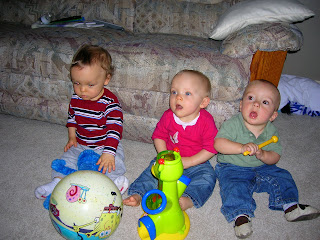 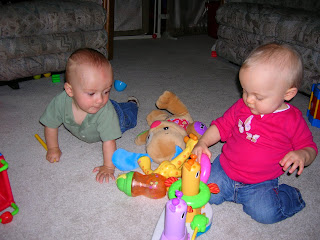 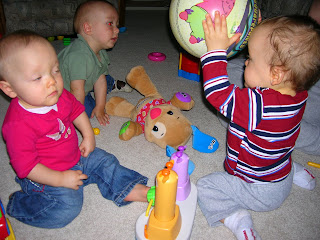 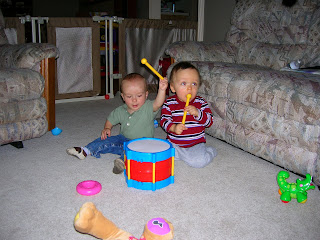 We went to our friend's Evan and Alyssa's today. They were preemies too, born at 30weeks. As you can see, my Sam is bigger than Alyssa and Evan is bigger than the both of them
Posted by Mommato4miracles at 5:13 PM No comments:

My boy can crawl!!! He is figuring out how to climb stairs and get into all kinds of things. He likes to climb underneath the end table and in the grass and everywhere he possibly can. HE is on the move!!! So fun and so cute:) 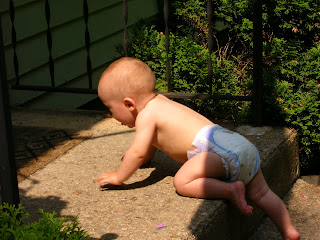 Posted by Mommato4miracles at 10:47 PM No comments:

Doreen at the Prom 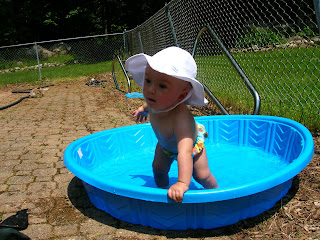 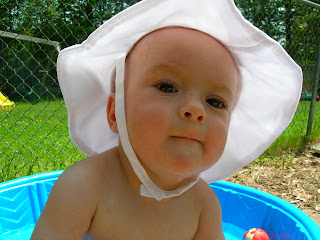 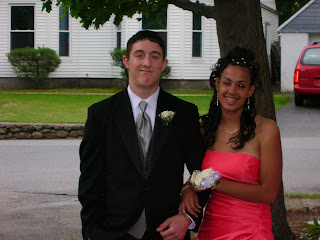 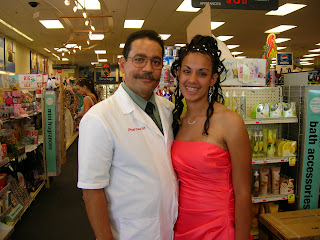 Talk about feeling old. My baby sister is going to the prom!! She looked very beautiful, although the pictures definitely don't capture it. Then we did the annual treck to CVS to show Dad. Denise and I were joking about when we did that for our proms. We hung out over here for the day and Sam got to go swimming. He absolutely loves the water.
Posted by Mommato4miracles at 2:28 PM 1 comment: