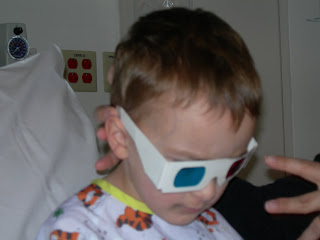 These two are the pics before I remember his special new johnnie. He was watching a movie in 3D, doesn't he look like he is having a blast? The nurses all enjoyed his silliness and playfullnes.8-) 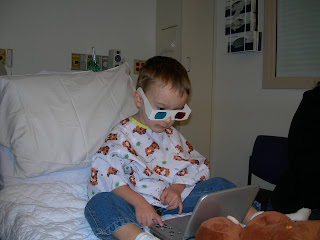 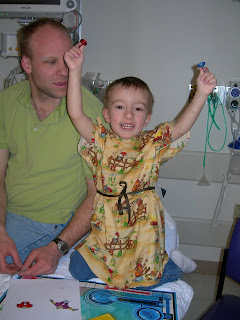 In these pictures notice Sam's super cool Cowboy johnnie! It was specially made just for him by a wonderful lady in Texas. She started an organization that makes johnnies for sick kids free of charge. So if you are looking for somewhere to donate some money to a wonderful cause, check out her blog at www.heartfeltcouture.blogspot.com I am just so impressed that they do this for these kids. What an amazing thing! And she even made Sam a little pillow with his name on it. Both are fabulous and we are truly thankful. 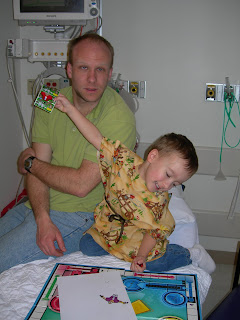 Thursday was Sam's endoscopy and all went well (kind of). They had to put him under general anesthesia and he did really well. He was so funny. They let me hold him while they put him to sleep, which is great for him, but it is so awful to be holding your child when they go limp in your arms. So anyways, the anesthesia masks are scented with different things and they asked him what he wanted his to smell like and he wouldn't answer, so they made it smell like strawberry I think. So while we were in the OR I kept asking him what it smelled like and he kept giggling and telling me all kinds of stuff: trash, skunk, poopy diaper, grass etc etc. He just thought it was the best thing ever.
So he went in for the procedure, he was intubated then they did the endoscopy and put the capsule at the entrance to his small intestine. Then they reversed the anesthesia and he came to recovery. He slept for almost two hours and then woke up in a good mood. They then let us leave with instructions to come back 6-8hrs later for them to check the placement of the capsule camera. So we took Sam to the Boston Children's Museum.
He loved the museum, and he had a great day. He said several times that it was a "fantastic day". There was a Curious George exhibit, construction site, water table room, etc etc. There was so much for him to see and do. He did seem to have quite low energy but I am sure with the anesthesia that is why.
We then went back to Children's and they essentially plugged the leads that Sammy was wearing into a lap top like computor. And then we saw his insides in real time. It was amazing to actually see his small intestine and possibly the appendix. Unfortunately at that initial time the capsule was not as far down as they would like, or they just couldn't determine where it was as his small bowel and large bowel may not look like what they have typically seen in the past. So they ended up wanting us to walk around some more, and so while we were walking the battery on the camera died, so we are unsure of whether the capsule made it all the way through the small intestines before it stop recording on not. It will take about two weeks for us to find out
Posted by Mommato4miracles at 9:08 PM