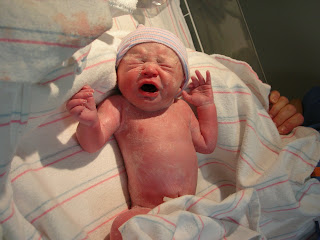 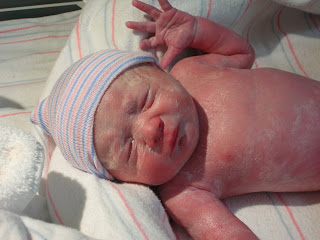 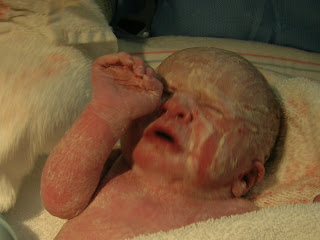 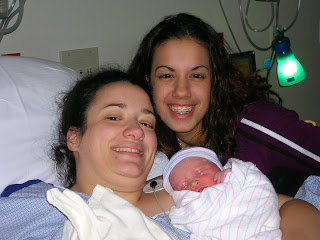 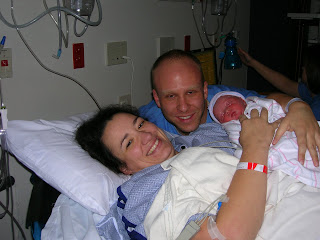 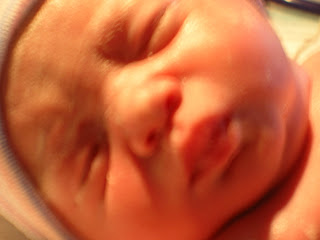 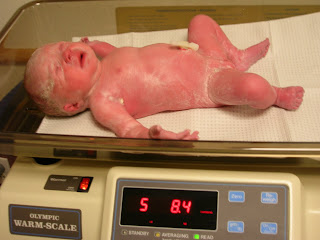 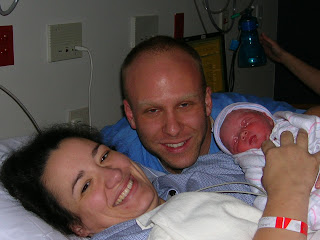 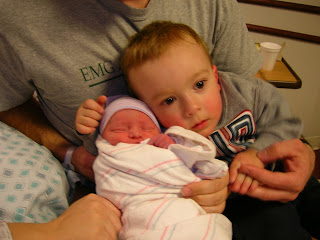 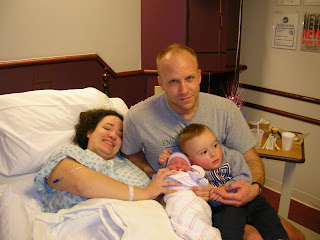 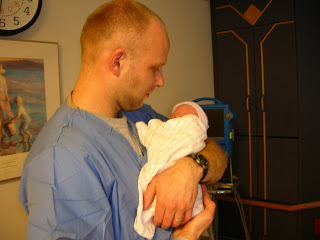 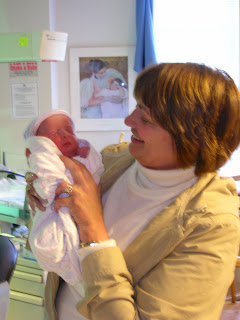 She is here and she is healthy!!! Here is the story of her birth: Saturday in the middle of the night I woke up with a severe headache and nausea/diarrhea. I knew that this wasn't a good sign, and called mom first thing in the morning to come check my BP. It was elevated, so Matt brought me up here while Mom took Sam to church. Once I got here they did blood work and put me on the monitor to find I was contracting every 2-3minutes. The doctor who was on call wanted to send me right to UMass, but thankfully she decided she would wait until monday morning if I remained semi stable.

Monday my doctor (the best in the world) came back from her trip away and conferred with the OBs here as well as pediatrician and UMass. Everyone was on board with me staying here as long as the baby continued to look well on the monitor. My liver function tests continued to elevated over the course of monday into tuesday and they decided that yesterday was the day! WE had everyone praying that Sophia would flip because she was breech, and God as always flipped her around, only noone knew:) We thank all of you for your continued prayers. The crazy thing is that Sophia was breech, even up until about 12pm yesterday, but sometime she flipped. So she wasn't breech after all. The doctors are still glad they did a section as they don't think I could have handle a long labor without my liver tests going through the roof and me getting very sick.

So officially: Sophia Grace Weber was born on March 18, 2008 at 4:18 in the afternoon, and was 18inches long and 5lb8oz! The same length as Sammy but more than a pound bigger!! Here are some pictures from yesterday and I will continue to post as often as I can.

On a side note yesterday my dad also had a heartattack:( He is doing well, although he has a 100% blockage in one of the arteries on the back side of his heart. THey did a cardiac catheritization and stent placement yesterday afternoon at St. Elizabeth's in Boston, so please continue to keep him in your prayers, as well as Sophia and I.
Posted by Mommato4miracles at 3:38 AM

Yay!! She is beautiful! Congratulations to all of you. You will love the feeling of being a family of 4. Rest and enjoy these early days as they are precious. My thoughts and prayers are with you.

Congratulations on your new addition. She is precious! I am glad that everything went smoothly and that both of you are healthy. You have a beautiful family!

Congrats! We are so happy for your family! Please let us know when you feellike having visits so we can help welcome your new addition! Also our thoughts and prayers are with your father!

CONGRATULATIONS! We are SO happy everything went well and Sophia is healthy!!!
We are praying for your dad and hope he is home soon!
Can't wait to see more pictures of Sophia!