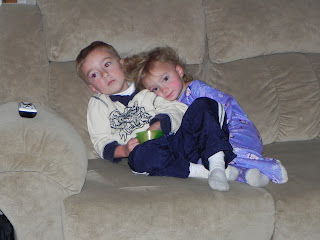 So yesterday was my grandmother's funeral. Sam slept later than normal and then came downstairs complaining that his belly hurt when he walked, and he was visibly uncomfortable. I pressed on his stomach which greatly increased his pain. To say at that moment that I was terrified would be the understatement of the year. As a nurse my first thought was appendicitis, and then of course my brain flew threw thoughts of bleeding issues is he needed it removed, it rupturing and him having a septic infection which he wouldn't be able to fight off, etc etc... It was horrible.
I quickly made the round of calls to his doctors. And waited extremely anxiously for them to call me back. Thankfully our primary called back and I was able to speak with her on the phone. She was wonderful as usual. We ran through all of his symptoms, and my fears. She reassured me multiple times that she thought he would be ok as we went to the funeral. She also researched where I should go (in relation to the funeral) if something happened while there. She made sure I had all of her numbers to get her immediately if needed...
We then went to the funeral and she said we could come immediately after regardless of time to see her. And that is what we did. Essentially once we saw her was that it was his colon that was inflammed/irritated. After speaking with her we decided that it was ok to be at home, and again was given a bunch of things to look for and to call her if there were any issues.
Today seemed to be a better day today. He isn't eating much at all, but there have been no explosive stools, and no fever. He has pretty low energy and I feel like he is kind of pale but all in all he is doing better. And Dr V being the wonderful doctor that she is called tonight to check on him, and again said that if I needed her to give her a call.
Posted by Mommato4miracles at 7:33 PM

Poor little man and poor you! I would have been terrified too.

I'm so glad that you have a good doctor who youmcan rely on. It has to be good to have that.

I hope your gorgeous little man improves soon and you can relax a little after such a traumatic time, with the funeral and sickness and your back.