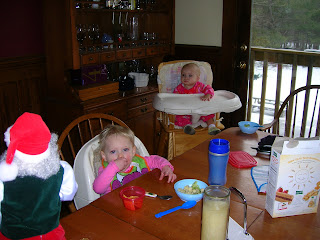 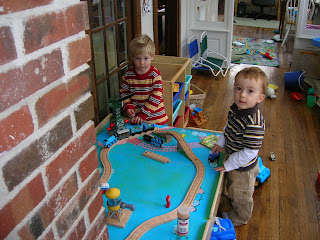 Owen and Sam sure do enjoy the trains 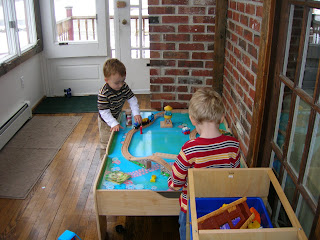 This morning we went over to my friend Myriah's house, Owen is one of Sam's best little friends. He really enjoys playing there
Today we had our follow up with Sophia's PCP, who mentioned something that I have been dreading hearing, something that I have been praying against. She said "Failure to thrive". I feel like a failure as a mother, like I should have prevented this. That I did something wrong to make her this way. Today her weight was 14lb 12oz. I must say also that the doctor wasn't concerned with her cognitively at all, as she is saying three words: mama, dada, and Up. She also says her version of Yay, which then leads to her clapping. She was concerned with the lack of crawling, but also remembered that Sam was a late crawler too. Her main concern is that malnourishment usually starts with weight loss, which we have, and then leads to height and head circumference involvement. The most concerning thing about Sophia right now is that she isn't even on the growth chart for weight, but is close to the 50th for her height and her head circumference. If all three were in the same percentile it wouldn't be that concerning. Here is some information that I got off Medline which is a great medical website, but it doesnt' really make me feel any better. Many of these things I know can not be contributing factors but there are a few that I can not 100%rule out. The thought of dealing with another child that is medically fragile (that is our insurances label for Sam) is overwhelming. I am praying that this little peanut is just that, small but healthy. She certainly is beautiful and happy. She just doesn't seem too interested in eating.
There are multiple medical causes of failure to thrive. These include:

Chromosome abnormalities such as Down syndrome and Turner syndrome
Defects in major organ systems
Problems with the endocrine system, such as thyroid hormone deficiency, growth hormone deficiency, or other hormone deficiencies
Damage to the brain or central nervous system, which may cause feeding difficulties in an infant
Heart or lung problems, which can affect how oxygen and nutrients move through the body
Anemia or other blood disorders
Gastrointestinal problems that result in malabsorption or a lack of digestive enzymes
Long-term gastroenteritis and gastroesophageal reflux (usually temporary)
Cerebral palsy
Long-term (chronic) infections
Metabolic disorders
Complications of pregnancy and low birth weight
Posted by Mommato4miracles at 6:35 PM

Don't fool yourself for one minute! You are an amazing mother and you just keep loving her everyday and let God do the rest! She will grow in her own time!