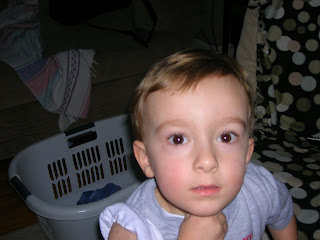 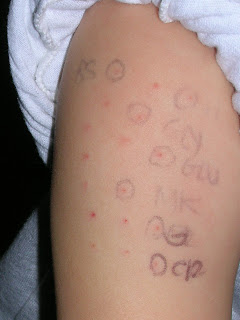 We went to the allergist today. I was so worried about it, how he would handle it and how I would. He was amazing, as is typical for him. The testing was not the scratch test, it was actually where they inject the allergen right into the skin with a needle. He barely flinched, and they poked him like 17 times or so. He was so funny when we came home, he went over to Sophia and showed her his arm and said look. He rolled up his sleeve and showed her. I was taking pictures and he wanted a picture of his arm, so I will post that for him:-) Silly boy! It was quite discouraging during the testing. OF the 17 pokes that he had he was allergic to all but two. Those two things were eggs, and saline! Dairy, gluten, many fruits and veggies and other things he is all allergic to. I have no idea what I am supposed to feed him now. WE go back on friday to do three more hours of testing and then will also have two more days of testing.
Posted by Mommato4miracles at 5:52 PM