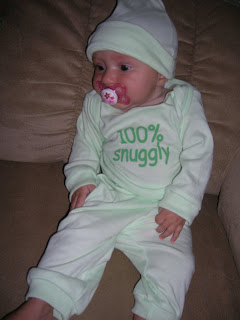 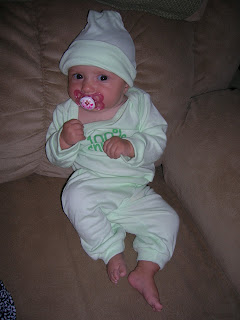 My little seems to not be feeling well. I know to most people that this wouldn't be that big of a deal, but I am so anxious about it. Sam was around 4 and a half months when he started having all of his problems, and Sophia is 4 and a half months. She has been fussy off and on the last week or so and messing with her ear, well yesterday she had a temp of 101, and wasn't eating well yesterday, last night and today. So I called the doctor and they got us in an hour later. She initially was acting okay and then started screaming which is how she has been acting. Her ears are not red or infected but they have mucous(never heard of mucous in ears before) and her throat looked okay. He said her belly was a little firm and that she was full of gas, that she could be brewing some kind of GI bug or something. My thing is that she has been off for several days and if it was just a bug wouldn't it have already started with the diarrhea or something? Anyways I am just anxious so please say some prayers for her.
Posted by Mommato4miracles at 4:21 PM

We'll be praying for your little cutie-pie!!!